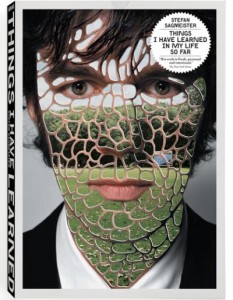 On Stefan Sagmeister’s Things I Have Learned In My Life So Far
The arguments these artists mount to the detraction of beauty come down to a single gripe: Beauty sells, and although their complaints usually are couched in the language of academic radicalism, they do not differ greatly from my grandmother’s haut bourgeois prejudices against people “in trade” who get their names “in the newspaper.” Beautiful art sells. If it sells itself, it is an idolatrous commodity; if it sells anything else, it is a seductive advertisement. Art is not idolatry, they say, nor is it advertising, and I would agree—with the caveat that idolatry and advertising are, indeed, art, and that the greatest works of art are always and inevitability a bit of both.
—Dave Hickey, “Enter the Dragon”

I like Things I Have Learned In My Life So Far. As a showcase for previously released Sagmeister material, it’s an improvement over Made You Look. However, the compilation aspect is a minor similarity between the books. The focus exhibited by Things can be partially attributed to presenting a themed series of works. But Sagmeister also continues to come into his own as an artist. So much so, in fact, that he deserves his own category: hyperdesigner.

What’s significant about Sagmeister’s work, and makes him a “hyperdesigner,” is that he’s not very original, as that term is classically used. He lifts freely from a wide range of designers and artists (in this book, he channels his post-Hipgnosis sensibility through Ed Ruscha). Sagmeister recognizes that the history of art is a history of appropriation and adaptation. And, more importantly, that graphic design is now a distinct language operating in culture, with its own idioms, tropes, and representations. Hyperdesign is graphic design taken to a higher level, self-aware and self-referencing.

This is one way that Sagmeister represents another crisis for the Modern movement in design. He’s jettisoned or contradicted nearly all of Modernism’s directives, not out of a contending doctrine but simply because it’s dull and confining. Never mind your literacy-warrior typography and “ugly” graphics; it’s Sagmeister who’s killed off the Modern design movement—with kindness. END_OF_DOCUMENT_TOKEN_TO_BE_REPLACED