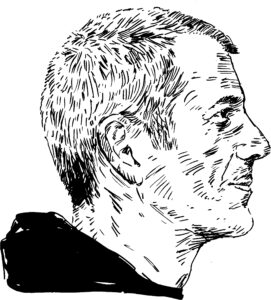 Ephemeral States is the site of
Kenneth FitzGerald,
••••••••an educator, designer, artist, curator, and writer living in Virginia USA.

As an educator,
••••••••I’m currently the Professor of Design at Old Dominion University in Norfolk, VA, and also taught at the University of Minnesota Duluth, and as an adjunct at Montserrat College of Art. I’m also a member of the founding Editorial Board of the academic journal Dialectic, and served on the Steering Committee of the AIGA Design Educators Community.

As a designer,
••••••••I’m self-taught (unless you count the MFA) and worked freelance predominantly for education, arts and cultural organizations alonside self-initiated projects. I produced The News of the Whirled, my novel in the form of 4-issue limited-edition magazine, for which I was principle writer, editor, designer, and imagist. NOTW received awards for excellence from the American Center for Design and AIGA, and is in the collection of Goldstein Museum of Design at the University of Minnesota.

As an artist,
••••••••my work is included in public and private collections primarily in New England and New York, with a number of artist books in the Franklin Furnace/Museum of Modern Art/Artists Books collection.

As a writer,
••••••••I’m author of Volume: Writings on Graphic Design, Music, Art, and Culture, published by Princeton Architectural Press, and had texts appear in Emigre, Print, Eye, Étapes, and Idea magazines; the books The Graphic Design Reader, Culture Is Not Always Popular: Fifteen Years of Design Observer, Total Armageddon: A Slanted Reader on Design, Graphic Design and Reading, Thought Experiments in Graphic Design Education, and The Education of a Graphic Designer volume 2; plus the online journals Design Observer, Voice: AIGA Journal of Graphic Design, and Speak Up. I wrote the forward for Stefan Sagmeister’s ggg Books monograph, and the official bio for the British music group Cornershop.

I’ve been curator of
••••••••Adversary: an exhibition (of) contesting graphic design, Emigre in Norfolk, Stefan Sagmeister: a graphic designer (with Jiwon Lee), and Repurposes (with Garland Kirkpatrick).

You can listen to
••••••••interviews with me on the design podcast Scratching the Surface in May 2017, and Design Matters with Debbie Millman from March 2006.

Or read a March 2016 interview at the VCFA Perpetual Beta blog.

Or view a YouTube video of my presentation, “Singing the Surface,” given at the Vermont College of Fine Arts in April 2016.

And watch another video that has the bio commissioned by the British music group Cornershop scroll by while you listen to their excellent 2002 track, “Staging the Plaguing of the Raised Platform.”